Posted on 6 months ago 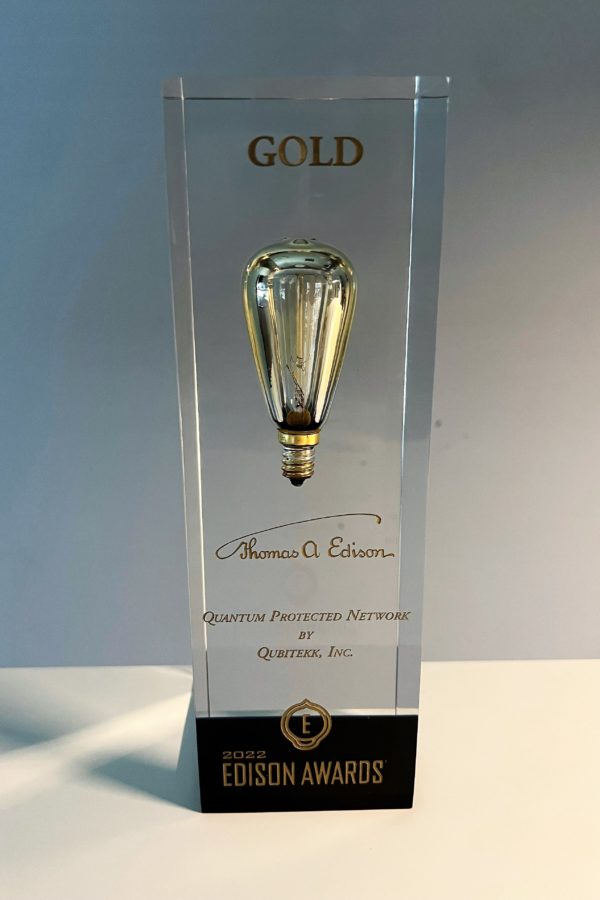 Qubitekk partners with EPB, ORNL, and LANL for the win!

Chattanooga, TN (May 17, 2022) – Quantum-Protected Network, a cybersecurity technology developed by Qubitekk and field tested in Chattanooga, TN at EPB and Tinker Air Force Base has won a 2022 Edison Gold Award. This new cybersecurity application is an extension of previous research and development by Qubitekk and EPB in partnership with the U.S. Department of Energy, Oak Ridge National Laboratory (ORNL) and Los Alamos National Laboratory.

“Qubitekk is an American-owned quantum networking company that has developed a quantum-based cyber security solution using entangled photon cryptography which creates an unbreakable link that is safe today and in the future,” said Dr. Duncan Earl, President and CTO of, Qubitekk, Inc.  “This application can be used as an unbreakable cybersecurity option today and also includes technology that can be a precursor for emerging quantum networks.”

The Quantum-Protected Network won the 2022 Edison Gold Award in the Communications and Cybersecurity category for critical human infrastructure.

Edison Awards are an annual competition honoring the highest levels of new product and service development, marketing, human-centered design and innovation. This prestigious award recognizes and honors innovations that create a positive impact on the world.

Qubitekk, ORNL, LANL and EPB have worked together for several years on using quantum technology to secure the electric grid. Based on quantum science and network security, a quantum-ensured defense uses quantum communications to help protect power grid control signals from third-party infiltration.  EPB is the only utility in the United States that is field testing this quantum technology.

The technology harnesses single particles of light, or photons, to distribute cryptographic keys that can be used to secure control signals with quantum keys to protect the electric grid.  This novel method brings the security assurances of quantum communication to electric grid systems while opening doors for the development of commercially available quantum networks.

The partners have demonstrated the operational use of this quantum technology under real-world conditions using progressively larger dedicated fiber optic test environments provided by EPB in Chattanooga. Funding for this project was provided by the U.S. Department of Energy’s Office of Cybersecurity, Energy Security and Emergency Response.

“Partnering in this and other future-facing research is part of our commitment to keeping Chattanooga on the leading edge,” said David Wade, President and CEO of EPB. “As we continue to make advances with this promising technology over the next few years, we want our customers to be the first to benefit.”

The 2022 Edison Awards showcased some of the world’s top innovation leaders and new products from around the globe.  The Edison Awards are named after inventor Thomas Edison.  Edison garnered 1,093 U.S. patents in his lifetime, making the inventor a household name.

For more information about the Edison Awards, visit the organization’s website.

Qubitekk designs, builds and integrates the hardware and software for quantum networks, a precursor to the quantum-enabled internet, while championing the growth of a robust quantum ecosystem through education, advocacy and collaboration.

Co-founded by Dr. Duncan Earl, a nationally recognized pioneer in the field of practical quantum applications, Qubitekk holds more patents than any American player in the quantum communications space.

UT-Battelle manages Oak Ridge National Lab for DOE’s Office of Science, the single largest supporter of basic research in the physical sciences in the United States. DOE’s Office of Science is working to address some of the most pressing challenges of our time. For more information, visit energy.gov/science.

EPB serves the people of the Chattanooga area with advanced smart city infrastructure to enable world-class energy and connectivity solutions that include the most resilient smart grid power distribution system in the United States and the fastest internet in the world. EPB gained national notice when it deployed a community-wide fiber optic network accessible to all its customers and used it to launch America’s first Gig-speed internet in 2010 (beating Google Fiber by 4 years) as well as the first 10 Gig internet service available as a standard offer to all residences and businesses in 2015.

EPB also utilized the fiber optic network as the communications backbone for deploying more than 200,000 smart switches, sensors and other devices to establish the most advanced and highly automated smart grid in the nation. As a result, the U.S. Department of Energy named EPB a living laboratory for pioneering smart grid technologies. Since then, EPB has partnered with Oak Ridge National Laboratory, the University of Tennessee at Chattanooga, and more than 20 other national research partners to play a critical role in more than $155 million in smart city research.  EPB was also the first major power distribution utility to earn the GBCI’s PEER certification for having a highly automated, modernized electric power grid in 2015 and followed up in 2021 by re-certifying at PEER Gold.

EPB is an independent board of the City of Chattanooga which began serving customers in 1939. Visit epb.com for more information.